Lately, the Optimus Prime molds have been a bit abused. Either they're painted white and lauded as an Ultra Magnus, or they're painted black and given the title of Nemesis Prime. Fortunately that trend is starting to buckle. Ultra Magnus is getting a unique, new mold for Animated. For the Universe line, a SDCC exclusive was offered in the form of Classics Optimus Prime repainted as Nemesis Prime. How much are these 2 molds related?

Broken by a nightmare eternity of torture at the hands of Straxus, Nemesis Prime does not remember what he was before he was this. He is the culmination of a grand plan never realized by Straxus before his destruction; a lowly warrior reconstructed to be the very image of Optimus Prime. Imprinted with memory engrams and combat algorithms recovered from hundreds of sources, he possesses much of the knowledge of the Autobot leader, but without any framework by which to organize it. Despite his incredible power, he is deeply unstable, a threat to Decepticon and Autobot alike. He cowers in the shadows of Cybertron, living only to stalk and destroy his fellow Transformers.. 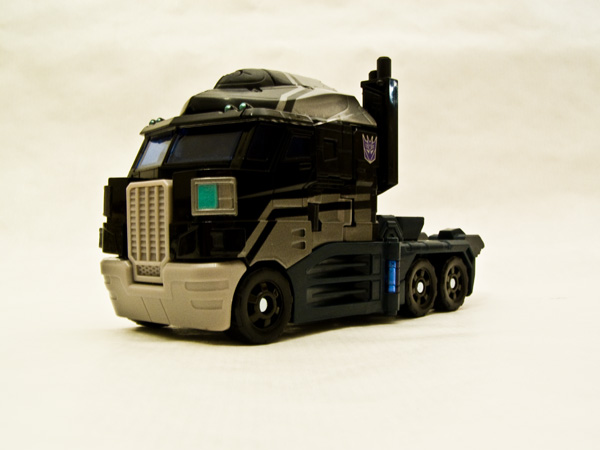 As mentioned, Nemesis Prime shares his mold with Classics Voyager Optimus Prime. Although the markings are exactly the same, the paint scheme is not. Nemesis Prime features a black and gray paint job on the cab half. The headlights are painted turquoise. The rear of the cab is done up in a cobalt blue. The smokestacks are black. The grille and front bumper are still in PVC gray, with the windows still in translucent blue. You'll find a Decepticon insignia behind the driver's door. 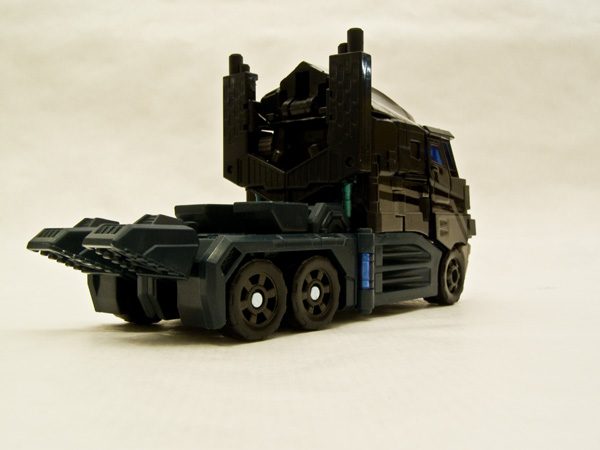 Sadly, there is no rubsign on Nemesis. The combination of cobalt blue, black and gray do a great job of breaking up the monotony of the paint job while giving it the sinister look a Nemesis needs. Overall, the mold is every bit as good as it was when Optimus was cast in it.

Transformation is identical to Optimus Prime. Start by removing the wind vane and smokestacks. Fold the tabs below the cab back until they're flush with the rear wheels. Grab each front fender and pull them back and away from the cab. Pull the rear assembly forward to form the legs. Pull the sleeper section of the cab out and forward to form the shoulders. Grabbing the top of the grille, twist the entire assembly BELOW the windshield 180 degrees. If you did this right, the rear wheels and the front grille will be pointing to the back.

Fold the feet up, then flip up the pads on his shins to form his knee guards. Pull the arm that held the wind vane back so you can pull out his head. Fold the base of that arm back in, then fold up the peg slot for the vane so it rests flush on his back. At this point, you can put the vane back in place. Fold the front bumper into the grille. Twist the shoulders 180 degrees until the turquoise shows, then twist the arms 180 degrees until you see the same. Flip out the fists, then fold the fender assemblies on each arm so that the headlights end up pointing towards his shoulders. Twist the head around to complete the process.

To form his stellar converter cannon:Fold out the 2 panels on the bottom of the smokestack assembly, flip out the small panel lodged in each smokestack, then fold the smokestacks together. The peg behind the grip fits in either fist.

To form his disruptor cannon:Remove the wind vane. Push the 2 sides of the vane inwards until they collapse on one another. Flip out the center portion of the vane, then flip out the muzzle. The peg also can fit either fist. 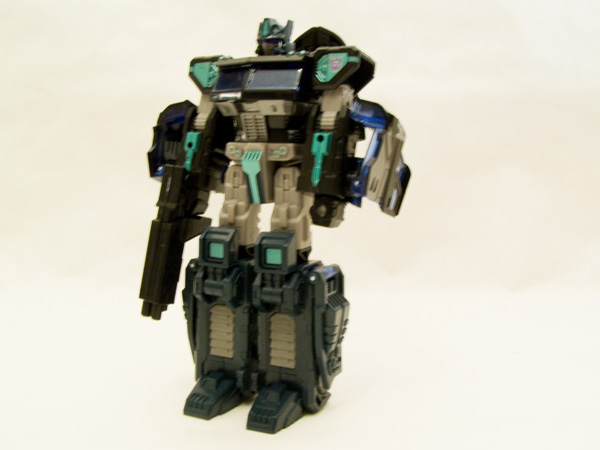 More turquoise comes out in robot mode. The shoulders, forearms, groin and knee guards are all done in turquoise. The upper limbs are still in PVC gray, with the lower legs in cobalt blue and the forearms in black. The head sculpt, while resembling Optimus Prime, is done in cobalt blue with turquoise on the forehead. The eyes are creepy. Piped in blue, they also have a red paint app in the middle. They look red without direct light, but with piping it gives off an eerie blue glow. You can find a Decepticon insignia on his left shoulder. 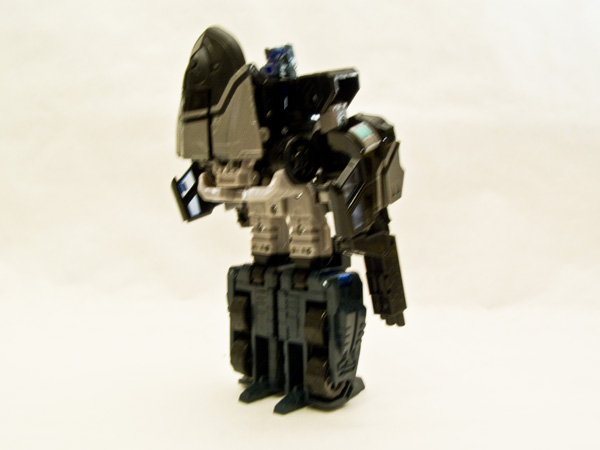 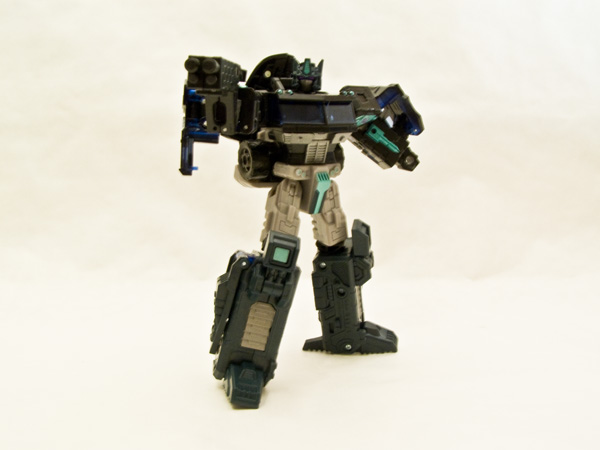 
Poseability on this figure is stellar. The only minor hindrance is the kibble preventing the waist from articulating more. The head can nod down, but at the risk of showing a gap behind the head. 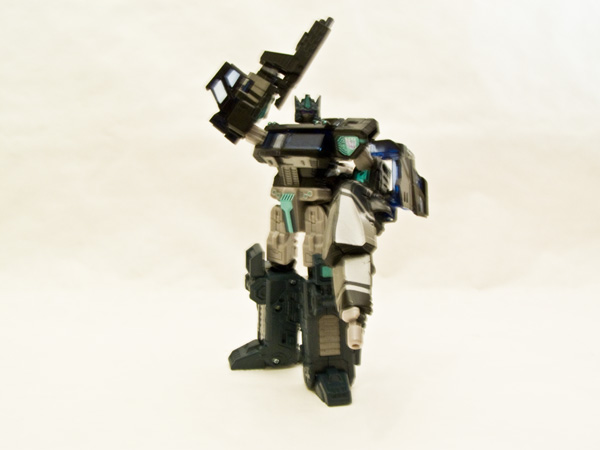 : As good as Optimus can look, but with enough differentiation to make it work differently
Robot Mode -

: The best doppleganger Prime since the original Scourge started it all in RiD. 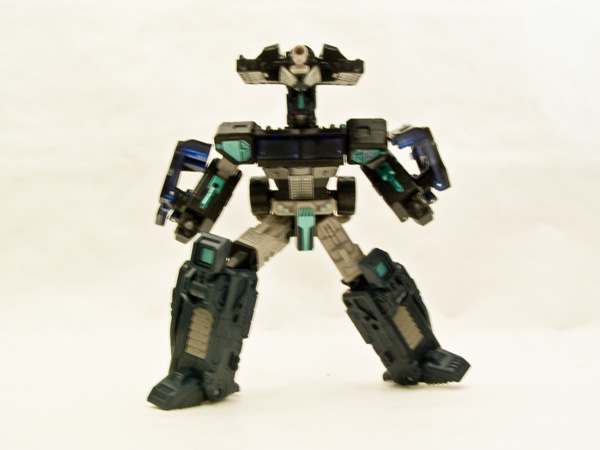