As the 25th Anniversary starts spinning into full gear, we get a look at the first Voyager class offering. Curiously, this is listed as a Generation 2 tribute. Originally appearing in Season 2 of the G1 anime, Inferno is the fire suppression expert who also enjoys suppressing Decepticons.

Though search and rescue is his primary function - and one he happens to be very good at - Inferno loves nothing more than a good fight. In fact, he will often abandon his duties or even ignore direct orders, just to go antagonize Decepticons. He especially loves to get up close to his enemies, where the energy-damping field he generates to help suppress fires can eliminate the effectiveness of their weapons. He uses the chemical foam sprayed from his arm cannon to blind opponents as often as he uses it to put out fires. 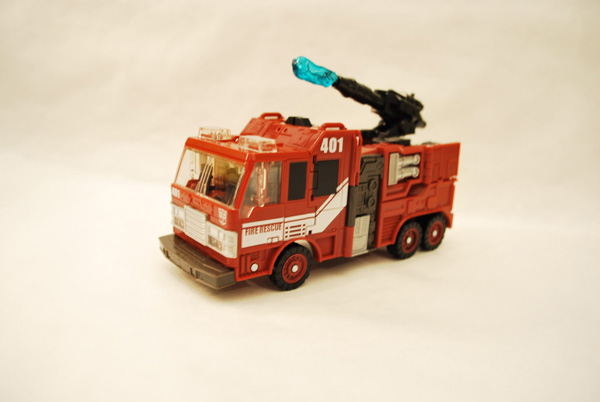 Originally, Inferno was a ladder truck mounted to a fire engine cab. This time around, he takes the guise of a pumper truck. Suitably, he is fire engine red for color. There are some white strips on the cab of the truck, along with the designation 401 on the sides and the front. "Fire Rescue" is scripted on each door. You will also notice some bronze and silver apps on the pumper control panel. Up top, a water cannon with a launchable missile resides. The cannon can rotate (albeit obstructed somewhat) a full 360 degrees and has 45 degree vertical tilt. 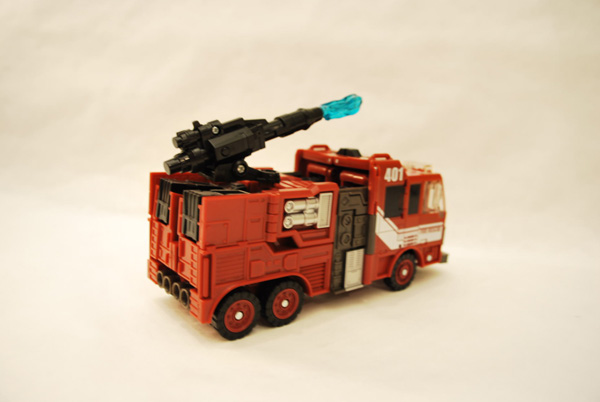 There is a lot of clear plastic used on the front. The lightbars on top, the windshield, front doors, side view mirrors and headlights are all done in clear plastic. It might have been nice to have red plastic for the lightbars. You can view a semi-detailed cockpit through the windshield, which includes 2 seats and a steering wheel.

Fold the front wheels in and under the cab. Grab the bronze panels and flip them forward. Separate the tabs holding the upper half of the rear end to the lower half. In one motion, bring the lower half of the rear end down and forward to form the legs. You'll notice the front wheels will also rotate forward and inward while doing this. Rotate each leg at the upper thigh 180 degrees. Flip down the black tabs to form the feet. Fold down the front bumper.

Rotate the water cannon 180 degrees so the missile points back. Pull back slightly on the rear of the cab to dislodge more tabs. Pull the rear section of the cab apart at the middle. You can then rotate the rear cab upwards in a gullwing fashion. Fold the black window that was behind the front door into the rest of the assembly. Now, you can pull the arms out and forward. Rotate the tabs on his sholders 180 degrees and fold them back. Fold the tabs on his forearms in then rotate the piece 180 degrees. Gently press down on the front part of the roof tab to spring his head into place. What is left is a little black piece on his back that folds into place. 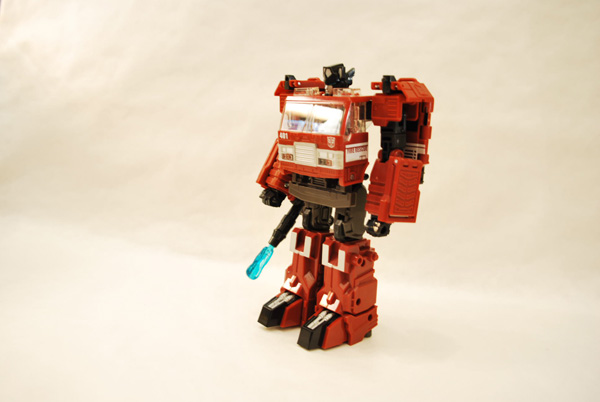 Inferno comes out looking a bit... chunky in robot mode. Besides the silver on the knees and bronze upper limbs, no new colors come out. The head sculpt is very faithful to the G2 (or G1) counterpart. A look on the side of his head will net the "winglets" formed by his water nozzles on the G1 mold. The eyes are piped in blue. 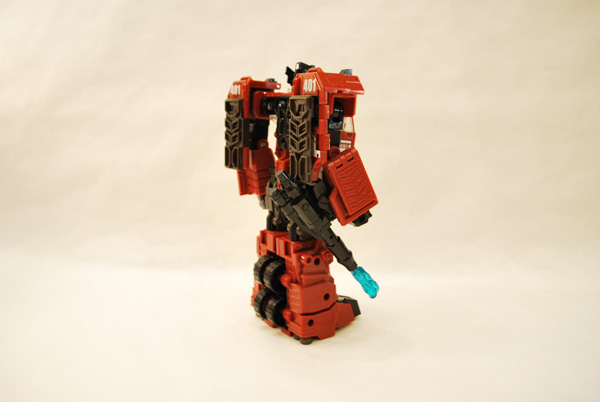 Due to all the tab folding, the water cannon permanently mounted on his right arm becomes obstructed when laying at his side. Fortunately, there's enough articulation in the arm to counter this. One common complaint seems to be with the bumper that folds down to form his crotchplate. Whether it's folded up or down, it just looks out of place. 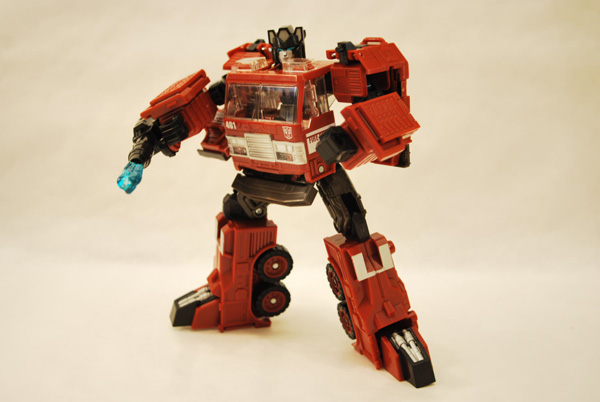 
Hip movement is limited due to the joint setup. However, it doesn't stop from cranking out some good poses.

:So he's not a ladder truck like he used to be, but he's still a very realistic fire truck
Robot Mode -

:Only some slight posing limitations and kibble to deal with Overall -