Already for the 25th Anniversary line, we have seen on reinterpretation of a Beast Wars character. Now, another is presented. Hoping once again to improve on a character, Hasbro has released a new mold of Dinobot. Originally a Predacon, Dinobot switched sides in order to find honor.

Within the chassis of Dinobot beats the spark of a warrior. Victory won with honor is the highest aim to which he has ever aspired. It is an aim that seems more and more remote, the longer he spends under the command of Megatron. Duplicity is not the warrior's way. As the battle on this strange, primitive world rages, it seems to Dinobot that true honor may come only through the Maximal way. 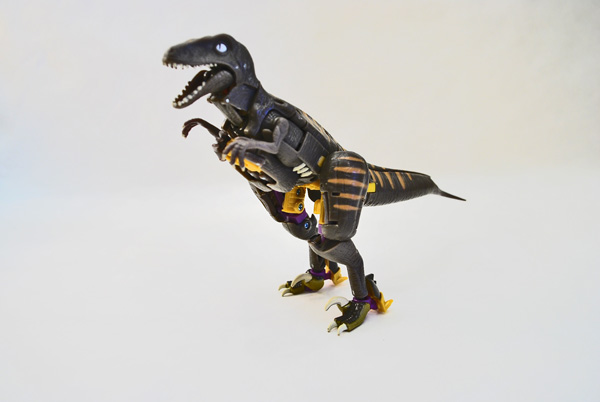 Universe Dinobot attempts to resolve complaints about the original 1995 figure. On the surface, it seems to do just that. First glance will confirm that the coloration of this velociraptor is accurate. Colors are a brownish-gray with tan stripes on the back. The eyes on the head are very reptilian like and the jaw is hinged so his mouth can open and close. The two "arms" are rubberized and can rotate. Although somewhat limited in range, he does have hip and knee movement, as well as ankle movement. 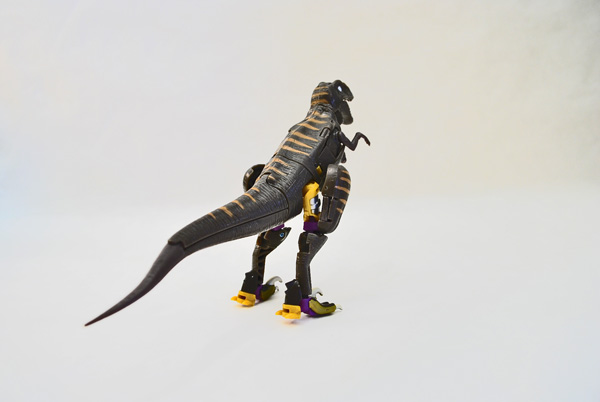 The back section of the tail is also rubberized. The front section is stiff and holds his missile in storage. Which brings me to my first negative. With the missile stored, the 3pc tail assembly has a hard time staying together. You'll have to leave the missile out for the tail to stay pegged in place. The chest area is very much lacking, with the robot fists clearly visible. This is a switch from the original, where the robot legs stuck out from the chest.

Dinobot doesn't transform as he looks. Start by folding down then rotating the haunches behind his beast mode feet to form his robot mode feet. Spin the entire foot assembly 180 degrees. Pull the sides of the thighs away and down. Twist the thigh piece 90 degrees back. You'll find some 'teeth' inside the thigh piece. Flip them out. The thigh piece will nestle behind the shins. Once in place, fold the teeth forward to 'lock' the piece in place. Grabbing just above the hips, pull the tail assembly upward to dislodge. Straighten out the legs.

Pull the fists completely out of the belly. Pull down the sides of the torso. Pull the robot arms away from the body in a wingspan motion. Push down the beast head, but do it carefully. Too much pushing and it will dislodge from it's peg hinge. Push the legs and waist in together, making sure you center the waist. Fold the sides back in. Twist the arms 90 degrees in at the shoulders and fold the arms down. The beast arms are on a swivel so they can be position on top of the shoulders. To transform the tail, split the top half of the tail in 2. Fold the bottom half of tail 180 degrees, then fold in the back side of the tail. 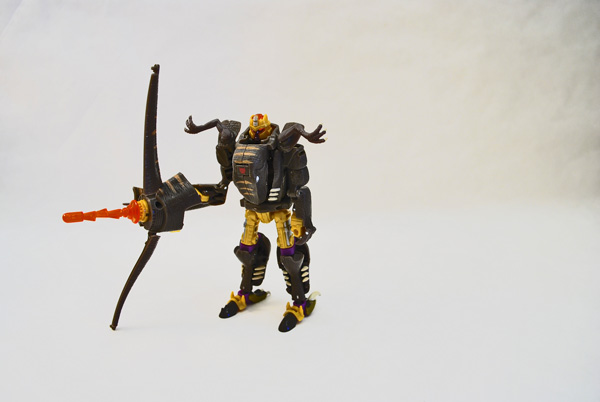 Although not perfect, the robot mode shows more resemblance to the Anime likeness. Gold appears at the thighs and hands. The head, for reasons unknown, is painted purple instead of blue. The eyes are piped orange. The tail weapon can fit in either hand by snapping the grip over either fist. The missile can either be loaded and spring launched by the launcher or used as a club by the free hand. 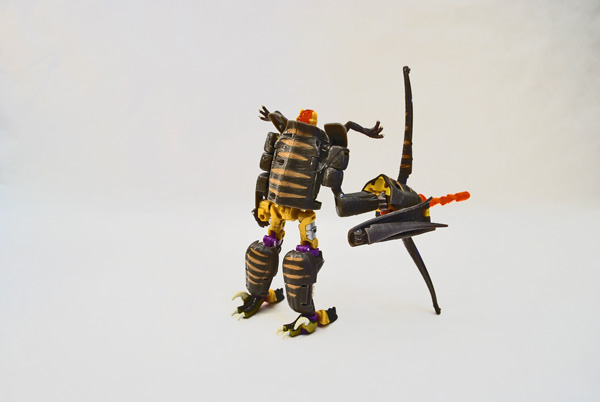 One gimmick that's useful is his faction insignia. There are three positions. In Beast mode, you can hide the faction altogether. In robot mode, you can switch between the Predacon and Maximal symbols by pressing on the square on his chest. The symbols lock in with snap action, and switching the symbol is pretty effortless. 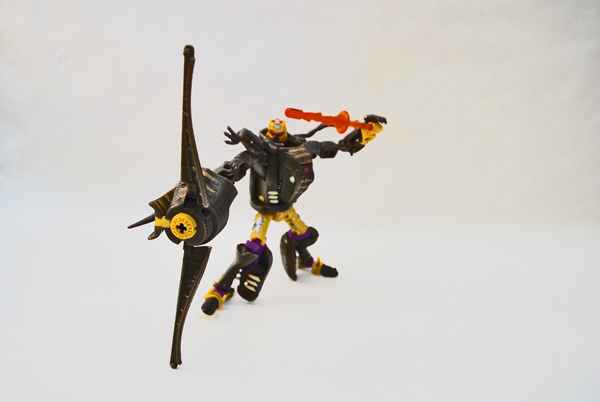 
The legs have disappointing articulation due to the thigh pack being on the shins. Moving the thigh pack will only improve rotation to 45 degrees. Otherwise, ample poseability

:Only thung ugly about this mode is the chest kibble.
Robot Mode -