Some fans may remember the last 2 robot combiner brought to us in a single pack. In the Energon line, Grimlock and Swoop were packaged together and could form the combiner Dinobot. The end result didn't sit well with fans. When Jetfire & Jetstorm were announced and initial images were shown, fans got a bad feeling about the end product. This review will show both bots in all their modes. 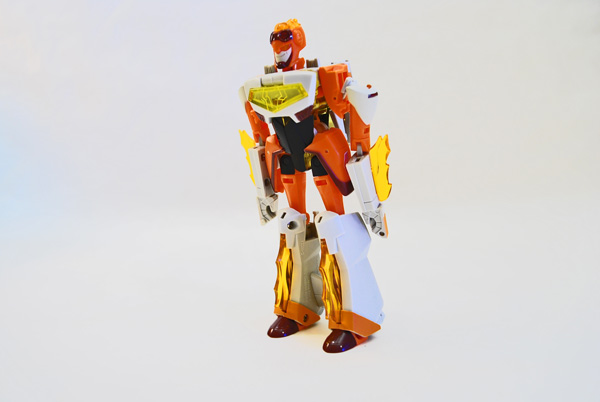 Both figures come packaged in robot mode, so we'll start there with Jetfire. He is a mixture of orange and white, with some translucent yellow on the chest. His forearms and shins are also adorned with some translucent orange bits. The abdomen is black, with some brown on the feet and head. The head sculpt is nicely detailed, with orange piping through the eyes. 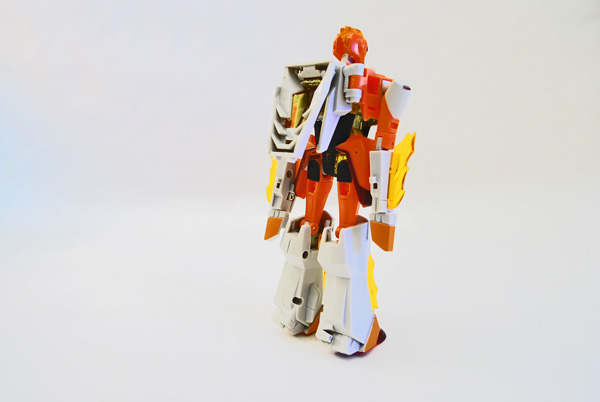 One thing that may strike you odd at first is that his left leg might be longer than the right. This is due to a later transformation, if you push up slightly, it will "click" and both legs will be symmetrical. Jetfire has no weapon, since he is portrayed as having the ability to wield fire. It's just the same, as his molded hands aren't capable of holding a weapon anyhow. 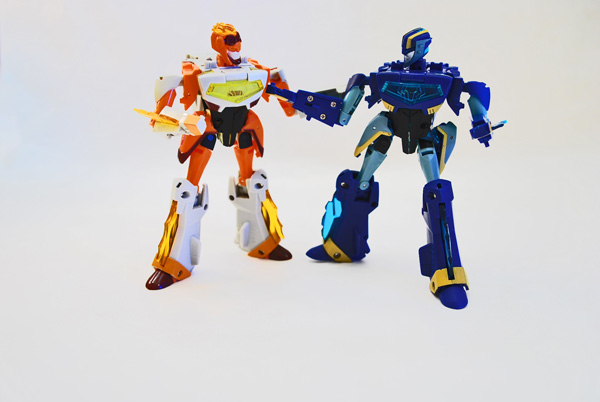 
Poseability is ok, but with very little hip spread you're limited on leg posing.

Start by folding his chest plate up so it covers his face. Fold his arms out in a wingspan formation, then twist the entire arm assembly 180 degree. Twist the hands down 90 degrees so they flush with the forearms. Fold the arms down at the shoulders, using the secondary joint to hit the hands below the knees. Pull back on the orange tab holding the shoulders in, rotate the tab 180 degrees, then fold the arms in to form the nosecone. Fold up the cockpit from behind his back, making sure the tabs on the forearms lock into the front of the cockpit.

Grab the legs at the hips and swing them up 180 degrees in a half-moon motion. This will raise up the hip guards. Rotate the legs so the feet stick out to the sides. Fold in the haunches, then fold down the feet. Pull the wings out from his shin, the collapse the legs towards the cockpit. There is a tab on the hip guard that fits into a slot just below the knees. Believe it or not, you're finished. 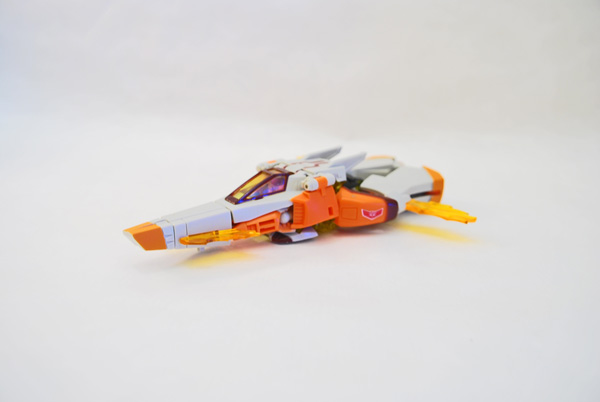 The jet mode emphasizes more on the white and less on the orange. You'll also notice brown stripes falling back from the cockpit. The cockpit is translucent orange. The nose wings and main wings are also done in translucent orange. You will notice small Elite Guard insignias on the hip guards. There is no landing gear, which is the first issue with this mode. 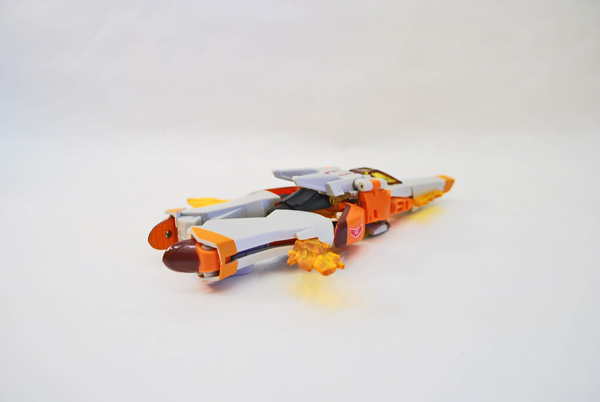 This has to be one of the laziest and uninspired alt modes in recent history, and certainly the worst of the Animated lineup. The robot legs literally hang off the back of the jet like they were bolted on after the fact. Looking at it from the dead front, the jet looks good. From any other angle, it's horrible. 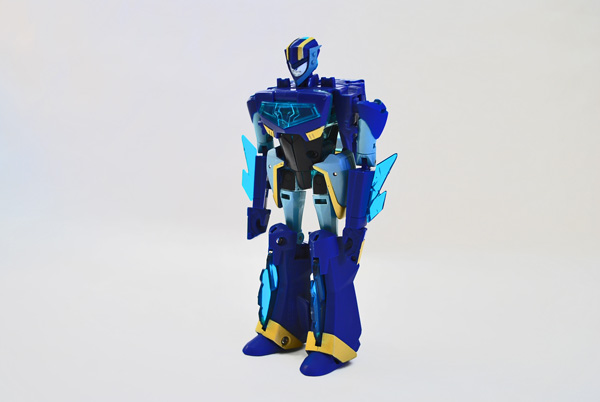 There's very little changes in mold between Jetstorm and Jetfire. Most of the changes are cosmetic. Jetfire is almost all blue, variating between dark blue on the lower limbs and light blue on the upper limbs. The chest is dark blue with some yellow. The chest plate is translucent blue, as are the winglets embedded in his arms and shins. 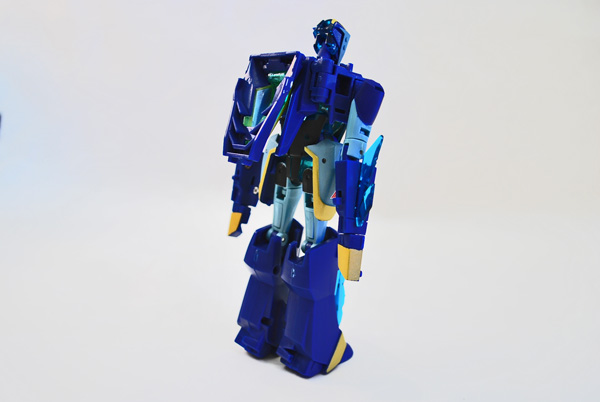 One change is with the head. Whereas Jetfire goes for the aviator look (with the "goggles" above his eyes), Jetstorm goes for the visor look. The visor is blue piped for effect. Everything else about Jetstorm, including articulation, is mechanically identical to Jetfire, including the transform sequence. 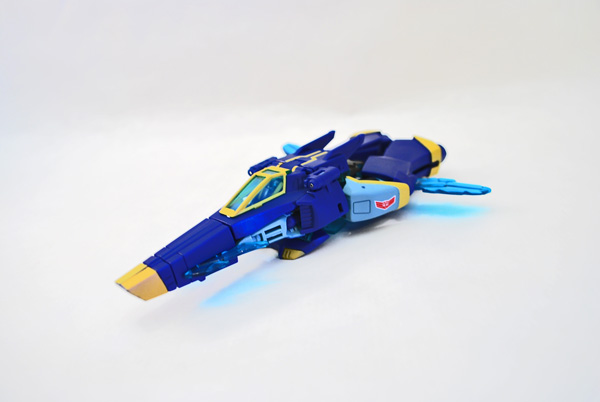 The same applies for his jet mode. The only mold changes are with the wings. Whereas Jetfire had flame molds for his nosewing and main wing, Jetstorm has more of an icicle look, with 2 protrusions making up his nosewing and a crystalline structure for his main wing. 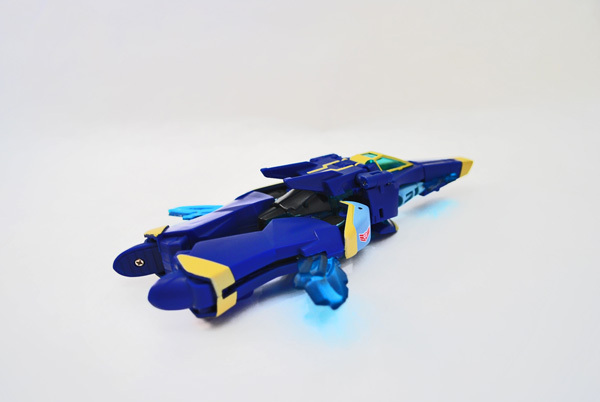 The cockpit for Jetstorm is translucent blue, keeping with the ice motif. However, in the end the jet mode for Jetstorm still looks as lackluster as Jetfire.

Created using the most advanced techniques known to Autobot science, Jetstorm and Jetfire were cloned from tech recovered from Starscream. Brought online in a secret laboratory deep beneath the surface of Cybertron, they are the first Autobots crated specifically to battle the Decepticons. Though they are young, they are extremely intelligence, working their way through Elite Guard Boot Camp in record time. Together, they are potentially the most powerful Autobots of all time, especially when they combine into their Safeguard form 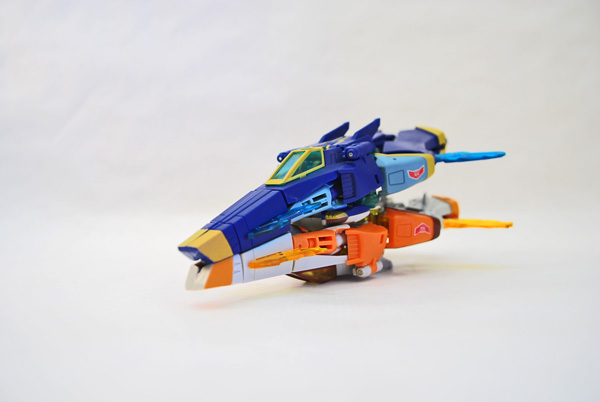 Jetstorm and Jetfire can combine in jet mode by hooking up to each others belly sections via tabs. The result is, well, both jet modes linked. This unfortunately does nothing to improve the looks 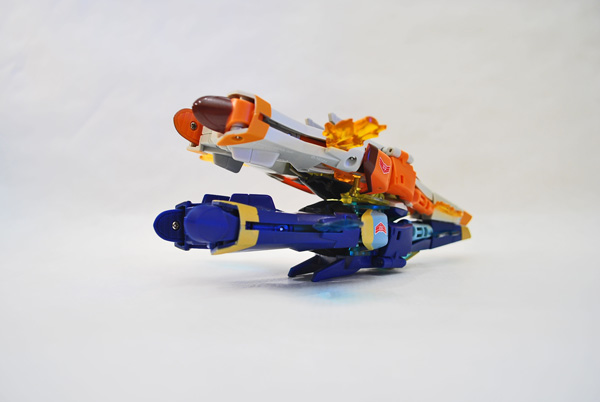 Due to the position of the locking tabs, both jets are actually combined at an angle. Therefore, the rear sections stick up quite a bit. If you were hoping this combined form would unlock some other feature, it doesn't.

To transform both warriors into Safeguard, start by having each at their robot modes. Starting with Jetfire, twist the hands so they are flush with the forearms. Dislodge the shoulders, but only swing them back halfway. Twist the arms so that they are diagonal from his body. Fold down the shoulder joints. Carefully split the crotch section in 2. I say carefully because the joints can pop off easy. If you happen to pop off his legs in particular, I wish you all the patience of God himself to get it back on. Lift the left leg up about 30 degrees. Twist the entire leg section, including the hip, 180 degrees. Continue bringing up the legs until it sits spread where his left shoulder was. Twist the leg 180 degrees, then pull it completely out. this serves as the right foot of Safeguard.

Mirror these instructions to transform Jetstorm into the left half. The two link via 4 connection tabs. One on the head, 2 on the chest and one on the crotchplate. 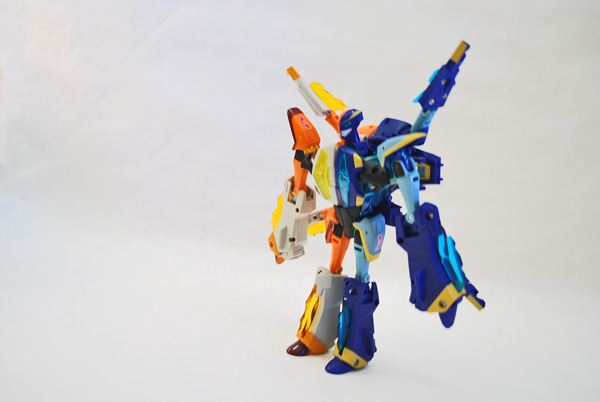 Dr Frankenstein would be proud. The resulting merger looks like a mess. having orange on one side and blue on the other furthers the lack of aesthetics. Worse yet, the crotchplate doesn't connect very well, so the connections tend to split apart after awhile. 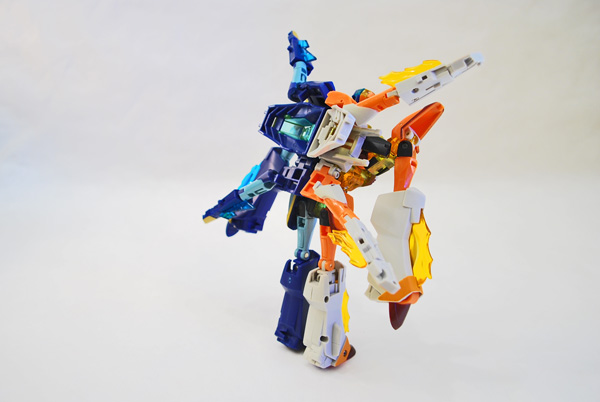 Curious is how Jetfire's half of the head looks. It ditches the goggles look and looks more like Jetstorm's head. Note that the 2 robot heads do not magically merge. Instead, 2 hidden "halfs" are used and the 2 full heads are concealed.


No head posing, and still the same restricted leg movement. In fact, too much adjustment of the legs will loosen the already weak connection point at the crotch.

About the only redeeming quality of this figure is that it comes packed with a comic. The comic is written by show writer Marty Isenberg, so no fear of a bad storyline. Although I will not spoil the plot, it is a good read. You will also be introduced to new characters: Perceptor, Wheeljack and RedAlert... a fembot! Oops, I said too much already...

:The best of any mode, although it suffers from restricted leg movement Safeguard Alt Mode -